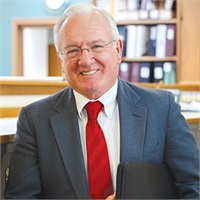 Norman Smith was born and raised in Olympia, Washington. Except for some time on active duty in the U.S. Army and professional practice in Seattle, he has lived here his whole life. Norm graduated from the University of Puget Sound in 1969 with a degree in Business Administration, with an emphasis in Accounting. His entire professional life has been in public accounting, and he has been president of NR Smith and Associates, P.S. since 1976.

In addition to receiving a Master’s in Business Administration with an emphasis in taxation from Golden Gate University in 1982, in 1987, Norm became a Certified Financial Planner. In 1996, he became a Personal Financial Specialist as conferred by the American Institute of Certified Public Accountants. Norm has actively participated in the Washington Society of Certified Public Accountants Personal Financial Planning Committee, including serving as chair.

Norm is an active golfer and member of the Indian Summer Golf and Country Club. He is also an avid cyclist, participating in both indoor cycling and major outdoor riding.